Orion and Gemini, prominent in the east at sunset and up all night, remind us why they’re called winter constellations. Canis Major and Leo are more easily seen in the west right after sunset.

Jupiter is almost still north of Spica all month. The planet is retrograde on the 6th. 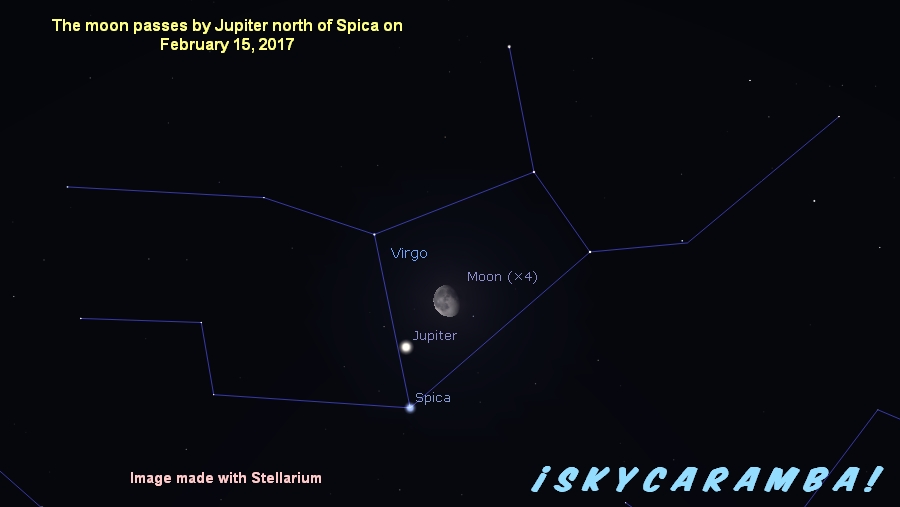 Saturn is a morning object moving east from Ophiuchus toward Sagittarius.

Mercury is more easily seen from near the equator and in the southern hemisphere this month. For those watching from farther north of the equator, the planet is right of the sun rather than above it. It is heading sunward this month and gets harder to see for anyone. 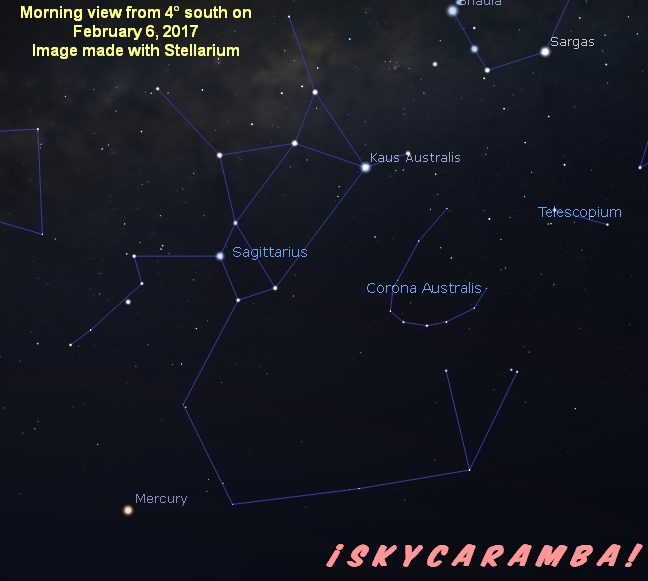 The moon passes in front of Aldebaran on the 5th. The time of the central conjunction in the Universal Time zone is 21:38. The place to be to see it is in the eastern Atlantic Ocean, southern Europe, or northern Africa. 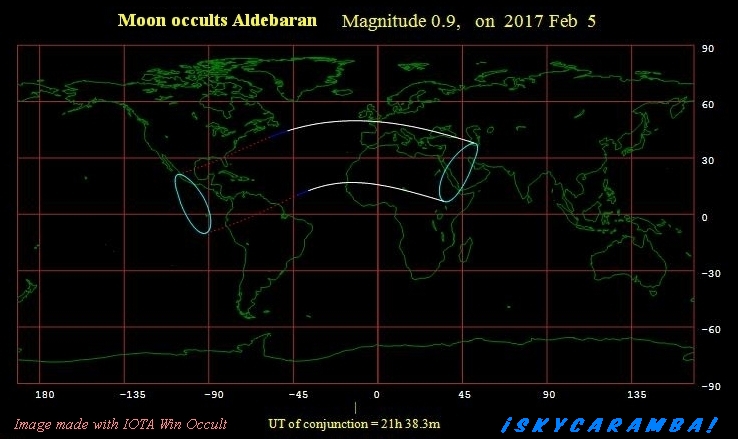 Regulus is occulted on the 11th. The central conjunction time is 14:29. You can see it from Australia, New Zealand, and the ocean south of there to the Wilkes Land region of Antarctica. 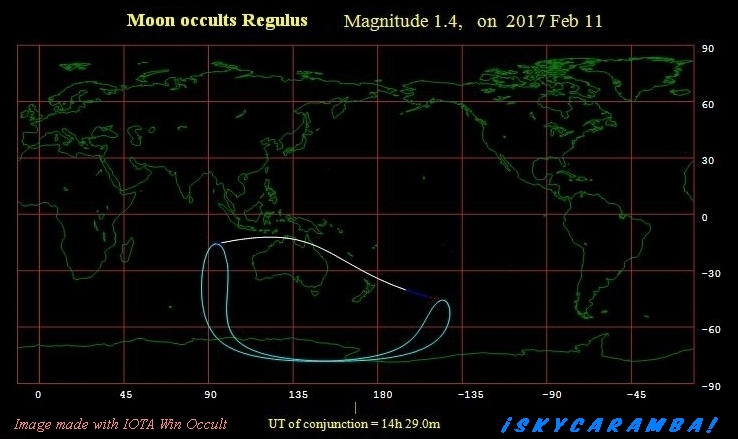 When the moon is full on the 11th, it will pass through the outer part of Earth’s shadow. Penumbral eclipses aren’t as interesting to most people as partial and total eclipses. If you watch carefully under good conditions, you may notice to moon becomes a little dim and then returns to full brightness. In some penumbral eclipses, people report a slight color change. Usually, the moon would be a bit redder. This eclipse begins at 22:34 UTC on the 10th. Greatest eclipse is at 00:44 on the 11th. It ends at 02:53 on the 11th. Visibility is from Africa, Europe, and parts of the Americas for the whole eclipse. It’s a moonset event for most of Asia and the Indian Ocean. And it happens during moonrise for most of the Americas and the eastern Pacific. 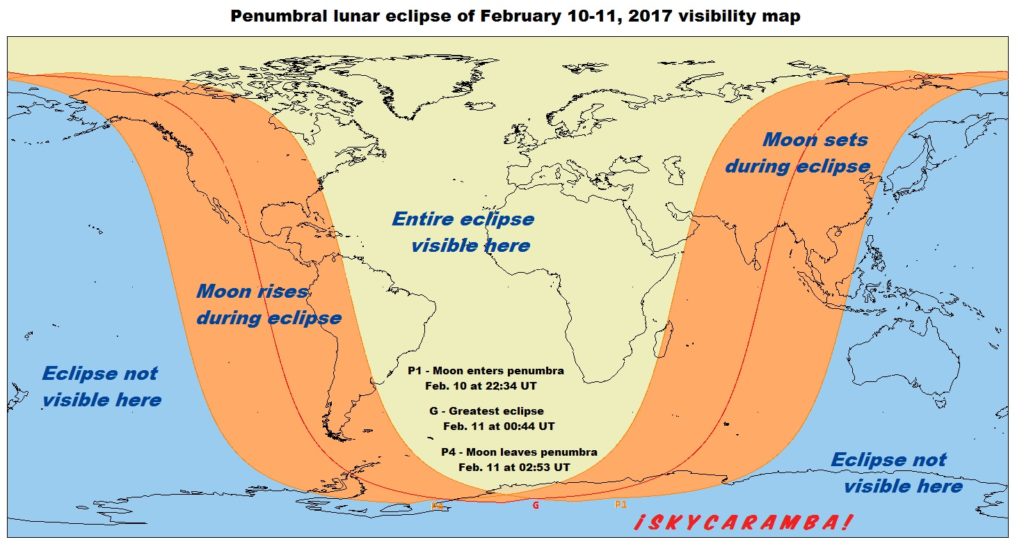 Most would agree the far more interesting eclipse happens at new moon on the 26th. The moon passes between the earth and sun slightly closer to the sun than necessary for a total eclipse. The resulting annular eclipse is called such because of the annulus–the ring of the sun’s disk surrounding the moon. The path of annularity stretches from the southeast Pacific Ocean, across the southern tip of South America, across the southern Atlantic Ocean, and onto the African continent. Partial phases can be seen as far south as Antarctica and as far north as Fortaleza, Brazil and the Tibesti Mountains in Chad. 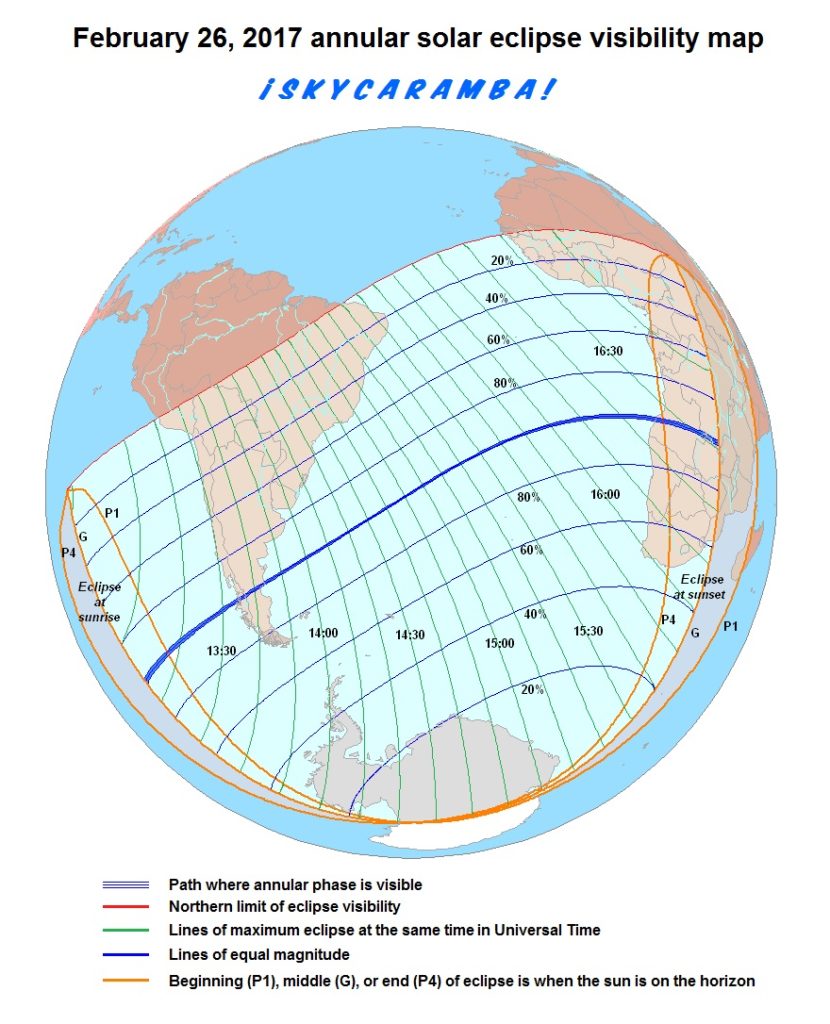 Please check out this clickable visibility map to find out when the February 26 eclipse starts and ends for any location on Earth. It will tell you which phases are visible there. You can also put in the latitude and longitude for the same information.