In the early part of this month, you’ll be able to see all five naked eye planets in the sky at the same time. You may think the best view is on the mornings in the first week of February. The moon is new on the 7th. So a waning moon will serve as a helpful guide to identifying several of the planets leading up to that date.

The moon passes Jupiter on January 27th and 28th. The big planet has already risen by late evening. So by the time we are looking at all the naked eye planets in the morning, Jupiter is high in the west a few hours before it sets.

At last quarter, the moon is next to Mars on the 1st. The red planet is next to Zubenelgenubi and about to enter the big diamond of Libra. The moon is gibbous the next morning when it’s between Mars and Saturn. A thick crescent is close to Saturn on the 3rd. The orange star right of the ringed planet is Antares. Over the next couple mornings, the thinning crescent heads toward Venus and Mercury. Venus is right of and brighter than Mercury. A very thin lunar crescent passes above them on the 6th.

The view of Mercury is best on the 7th. It’s at greatest elongation 25.6° west of the sun. Keep watching the innermost planets after the moon departs. It seems as though Mercury realizes Venus is in hot pursuit and the messenger planet speeds up to keep away. Mercury will vanish into the light of the rising sun by month’s end. But Venus, ever bright and beautiful, will still be found after the other nighttime objects have faded.

On the 21st, Mars has passed out of the diamond of Libra. The moon, just past full, passes Jupiter on the 23rd and 24th. It will be close to Mars on the 29th.

The moon is closest to Earth on the 11th.

If you’re in the northern Pacific Ocean on the 16th, you can see the moon pass in front of Aldebaran. 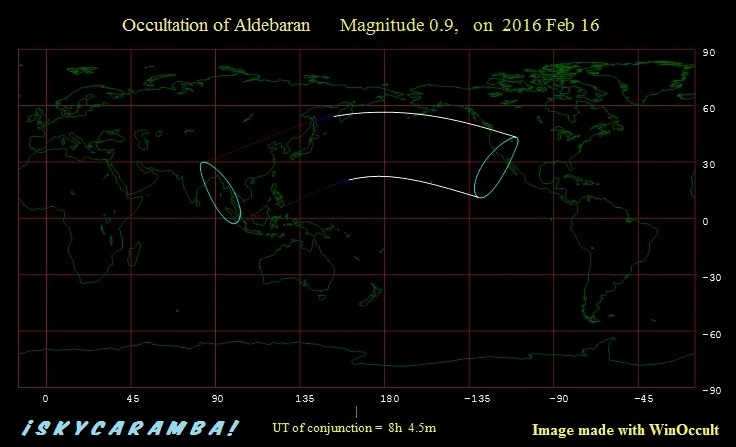 The moon is farthest from Earth on the 22nd.

By the end of February, you’ll notice that Jupiter is rising early enough in the evening to be up almost all night. It reaches opposition in March.

Images on this page made with Stellarium, WinOccult.