As April 2016 starts, the Taurus V and the Pleiades are high in the west at sunset. Orion is a little higher and sets after them. Canis Major is closer to the meridian and so sets about midnight. Leo is high in the east with Jupiter just below it.

Mercury is a little hard to spot this month. Besides being closest to the sun on the 5th, there isn’t much near it to guide your eye to the planet. But it’s rising earlier and is higher in the west at sunset each evening. The crescent moon will help you see the messenger planet on the 9th. The moon is left of it then. Mercury will be at greatest elongation on the 18th. It begins retrograde motion on the 29th. 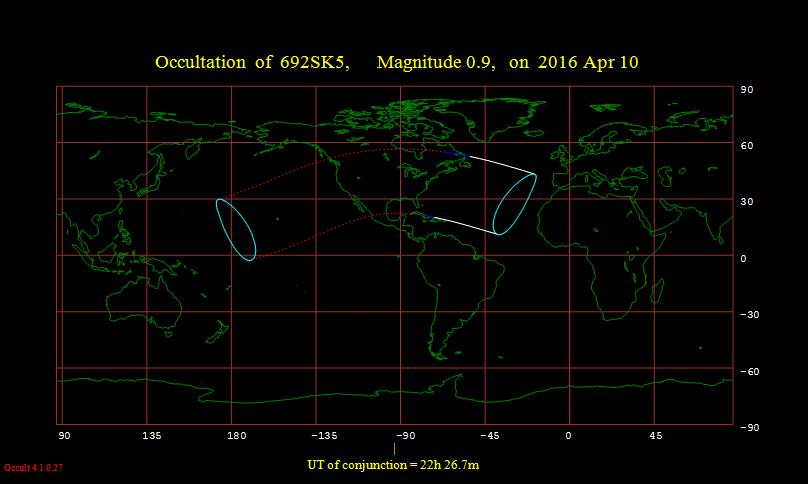 A slightly thicker moon passes Aldebaran on the 11th. There’ll be another lunar occultation of the star on the 10th. The view is from the northern Atlantic Ocean. At nearly first quarter, the moon passes Alhena in Gemini on the 13th. On the way to becoming full, the moon passes Regulus on the 17th, Jupiter on the 18th, Porrima in Virgo on the 20th, and Spica on the 21st.

Jupiter is going westward all month, but it stays at the belly of the lion. Having been through opposition in March, it’s still up most of the night in April.

Mars is above Saturn by Scorpio. These two planets and the scorpion are morning risers as April starts and on the meridian by dawn at month’s end. Mars starts out in direct motion and goes retrograde on the 17th. Saturn stays retrograde all month. So you can see them moving toward each other until mid-month when it seems as though the red planet changes its mind about a meeting. The moon is near them on the 25th and 26th.

Venus isn’t usually so tricky to see as it is this month. It seems to hover in place in the morning sky. The easiest places to see it from are in the southern hemisphere. Careful observers in northern Africa, most of Europe, and most of Asia get a daytime occultation of the planet as the moon passes in front of it on the 6th. 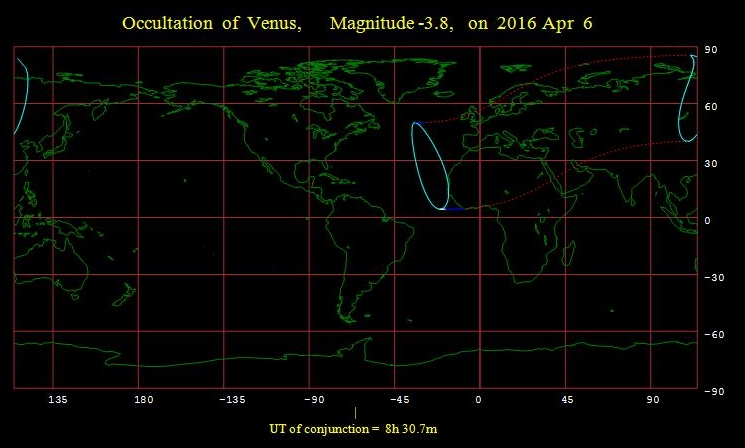 The April Lyrid meteor shower peaks around the 22nd. But the moon, just past full, will make it difficult to see this year. You may still see a few very bright ones though.

Some graphics on this page were made with Stellarium and WinOccult.