Every year or two, a near-earth asteroid or other object is in the news. People want to know if it will hit the earth. It would be wrong to say it can never happen. But it would also be wrong to say it’s very likely. 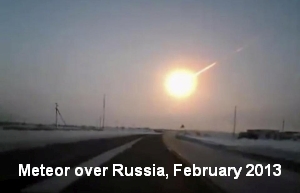 Most space rocks that enter Earth’s atmosphere burn up before they come close to the ground. We see them as meteors. Meteors enter the atmosphere all the time. You can go outside on any clear night where you have a dark sky and see one if you wait long enough. U.S. military defense systems designed to track heat trails from missiles started detecting meteor trails as soon as they went online in the 1970s.

Fortunately for us, nearly all such foreign objects that streak through our skies are just meteors about the size of a piece of gravel or smaller. That’s why they burn up when bombarded with air particles. Larger rocks have material left when they travel all the way down. And because they’re moving at thousands of miles per hour, a lot of energy is released when they hit something. The evidence of such a strike 50,000 years ago is preserved in a mile-wide 550 ft. deep depression at Meteor Crater in Arizona. 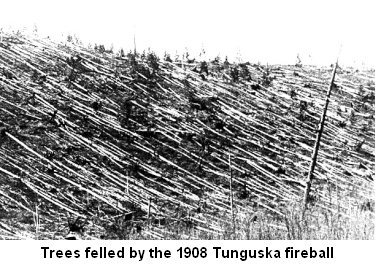 Even if it doesn’t hit something, a larger rock that finally breaks into smaller pieces while still traveling so fast can release a lot of energy in a big shockwave. That’s what happened in Chelyabinsk, Russia on February 15, 2013. Windows were broken, walls were cracked, and a few people were hurt in the city’s downtown when the fireball blew up about 20 km overhead.

An even bigger explosion happened over Tunguska in Russia in 1908. Luckily, no one was hurt. The area was so remote, no one could even get to it to see the damaged forest for three decades!

Smaller objects have injured people and animals and damaged property. In Egypt in 1911, a dog was killed by a meteorite. In Alabama in 1954, a woman suffered a horrible bruise when a space rock crashed through her roof, bounced off a radio, and struck her in the hip. A bouncing meteor found a way to crash through a home’s ceiling twice in 1982 in Connecticut. And a New York state woman investigating a crash she heard outside her home in 1992, discovered a huge dent in her husband’s car and a large rock next to it. 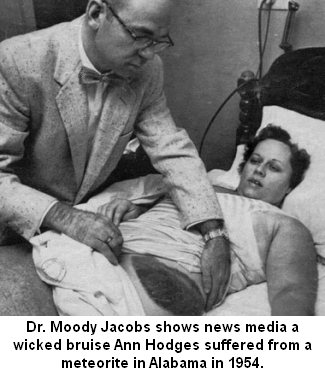 It’s not unreasonable then that some people worry a big asteroid will someday hit the earth and cause widespread damage and death. Recently, they used 1,500-foot wide asteroid 2004 BL86 as an example of things to worry about. However, as it passed by 745,000 miles away, there was no danger. On the scale of a 12-inch globe, it came only as close as 94 feet.

A better object to worry about would be 2014 AA. Astronomers noticed it just 21 hours before it landed on January 2, 2014, and they’re not exactly sure where it went. It likely made a big splash in the Atlantic Ocean. Or consider 2008 TC3 which blew into pieces over Sudan on October 7, 2008 just 19 hours after its discovery.

About 12,000 near-earth asteroids are known. These are of interest to scientists who want to know their origins, military minds who want to protect the planet from them, and amateur astronomers who just find them interesting. To those worried about the next impact though, the point should be made that the bigger threat comes from the objects we don’t know about yet.