A story that goes around from time to time claims Mars will come so close to Earth, it will look as big as the full moon. Don’t be fooled. It’s a hoax! 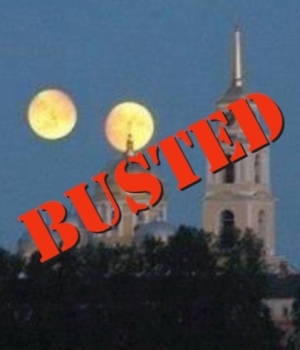 The hoax started with the 2003 opposition of Mars when the red planet passed a little less than 56 million kilometers or 35 million miles from Earth. That’s as close as the two planets had been in about 60,000 years.

Certainly, there were some good views of Mars because it was so close. But you needed a telescope for those good views—or else it just looked like a dot.

Well, someone somewhere started an email that claimed Mars and the full moon would be side by side and that the planet would look as big as the full moon to the naked eye. A lot of people shared and spread that email. Some were surely disappointed when the big night came.

The email went around again in 2005 when Mars approached opposition again. It’s gone around several times since then via social media. And it appears at seemingly random times now—not just when Mars is approaching opposition.

If you do a little trigonometry, you’ll see that Mars would have to pass dangerously close to Earth to look as big as the full moon. The moon appears half a degree wide to us on the earth’s surface. For Mars, 4,212 miles wide, to look that big, it would have to be less than a half million miles away. That’s a little more than twice the moon’s distance.

If that ever happens, we may not be alive to enjoy the splendid view of our close encounter.It will mean something has knocked Earth, Mars, or both way out of the orbits we know now. If Earth doesn’t get the life ending hit that sends us toward Mars, Mars passing so close to us would subject our planet to big tidal forces that slosh the oceans around in more destructive ways than any hurricane or tsunami has ever done.

Let’s give credit where credit is due. One early message that got people excited about the close call with Mars in 2003 did contain lots of factual information. There was one line that said in a 75x telescope view, Mars would look as big as the full moon does to the naked eye. The prankster behind the hoax appears to have been influenced by that message. Don’t we all have friends we’re afraid to say things to because they hear just part of a story and weave a very different tale?

So don’t fall for the Mars-big-as-the-full-moon hoax. Turn to reputable sources for astronomy information and enjoy the view of Mars as it really is.