During the next two weeks or so, you may see up to 20 bright yellow meteors per hour that trace back to a point near a star named Skat. These are the Delta Aquarid meteors. The star Skat is also called δ Aquarii.

This meteor shower peaks on or about July 29. That’s when Earth passes closest to or through the dust trail 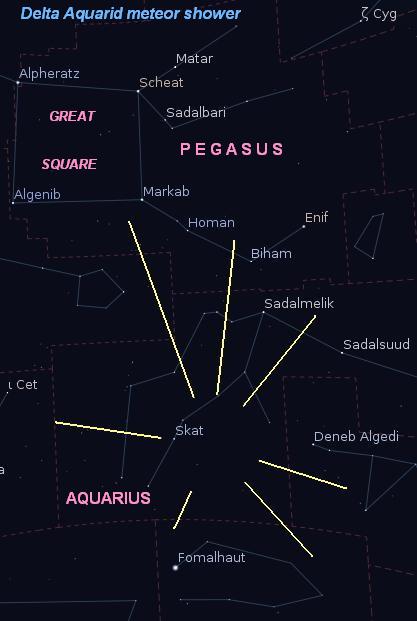 responsible for it. Astronomers think that’s Comet 96P/Machholz. David Machholz discovered the comet in 1986. In the years since, scientists who analyzed its orbit have come to suspect Comet Machholz is the parent of the Delta Aquarids.

Comet Machholz orbits the sun every five years, going closer to the sun than Mercury and farther from it than Jupiter during that time. The comet was closest to the sun a year ago and will be again in October 2017. If the Delta Aquarids come from the 96P/Machholz trail, this could be a good year for them.

This is a good southern hemisphere meteor shower. It’s pretty well observed in the northern hemisphere too. Look from midnight to dawn. If you see a meteor, try to determine if the track it makes would extend all the way back to the star Skat. Skat is close to a more well known star named Fomalhaut. It’s also somewhat close to the Great Square of Pegasus.

Less than 10% of Delta Aquarids leave persistent, or glowing, trails. Those that glow for a second or two are easier to use for determining where they seem to radiate from. Since most won’t be so accommodating, you’ll have to observe carefully.

A last quarter moon will make it hard to see most of these meteors on the peak date this year. But you may still see plenty of them in early August while the moon wanes and enters new moon phase.