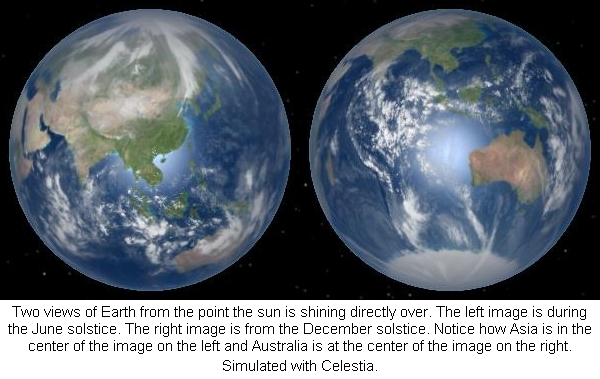 The June solstice happens at 05:04 Universal Time on June 21 this year. In the northern hemisphere, this is often called the summer solstice. And in the southern hemisphere, it’s often called the winter solstice. Many people consider the solstice to be the official start of the season associated with it. That’s despite the weather associated with those seasons often being well underway in some places by the time the solstices occur.

The word solstice means “sun standing still”. Although the sun continues to move across our sky from east to west, it is said to stand still in the sense that it halts its northward or southward movement before going the other way. This happens because the axis around which the earth turns is not at a right angle with the plane in which the earth orbits. In June, the northern hemisphere is the one tilted toward the sun. In December, when the planet has moved to the other side of its orbit, the southern hemisphere is tilted toward the sun.

This tilt of 23.4° is enough to cause the big weather differences we know as the seasons. In the hemisphere pointed toward the sun, daylight hours are longer and the sun’s rays strike the planet’s surface more directly. So the sun’s energy is applied there longer and at an angle that allows more of it to be transferred to the surface. Thus, the summer is hot. Understandably, in the hemisphere where the sun isn’t up as long and where less energy is transferred to the surface, it doesn’t get hot. The earth’s winter hemisphere loses a lot of heat to space during the longer nighttimes and doesn’t get as much energy replenished during daylight.

That’s just the start of how the sun influences the weather. The movement of water in the oceans and air in the atmosphere transfers heat from warm regions to cold ones. Human activity affects weather in smaller but measurable ways too. Cities get warmer than the rural countryside because pavement and rooftops absorb the sun’s energy and don’t do anything with it except get warm. Vegetation, however, uses some of the energy it absorbs in the chemical reactions that keep plants alive.

The sun’s journey from 23.4° north to 23.4° south adds up to 46.8°. That’s more than a quarter of the way across the sky! If you take a moment every week or two when the sun is highest in the sky for the day and notice where fixed objects’ shadows fall, you can easily observe the journey without having to look directly at the sun. You can also make a note of how far the direct sunlight reaches into a room when the sun shines through a window. Take pictures and compare them for a really clear understanding!