Mercury will be at its highest in the evening sky on June 12th. Unlike the planets that are farther from the sun than Earth, Mercury and Venus never reach the opposite side of the sky from the sun. Venus reaches about 46° of separation from the sun. Mercury only about 27° at the most. 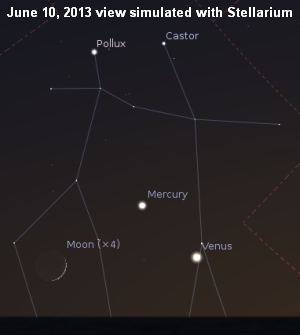 Mercury is 24.3° from the sun on the 12th. You’ll see it shortly after sunset above the much brighter Venus. You may remember that Jupiter, Mercury, and Venus were together in that part of the sky just a few months ago. Jupiter is already heading down into the sunset. And Venus is heading upward until it’s above them.

A thin crescent moon will be left of the two planets on the 10th. The crescent thickens and moves above night after night. Then Venus catches up to Mercury and is just 2° from it around the 17th. Mercury is dropping by this time. Venus will continue rising upward night after night until Mercury is back in the sun’s glare in the next few weeks.

Don’t confuse the two planets with two stars above the. Pollux and Castor are the stars’ names. Those are also the names of the twins of Gemini. The constellation is moving downward in the background evening to evening.

To see all this, pick a good viewing location without much on the horizon in the west to northwest where the sun sets. And hope for good weather. A few clouds on the horizon could make thing difficult. 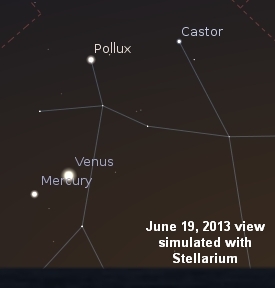