It’s been 20 years since Comet Swift-Tuttle came close to the sun and earth. Its orbit takes 133 years. Every time around, it leaves calling cards you can see streaking across the sky every August. This year’s expected to be a good year for seeing the Perseid meteor shower.

People have seen meteors for as long as there have been people to look at the night sky. It wasn’t until 1866 that someone positively linked them to comets. A higher than expected number of meteors were observed coming from the constellation Perseus in August in 1861, 1862, and 1863. A few people wondered if the comet Lewis Swift and Horace Parnell Tuttle discovered in 1862 had something to do with it. 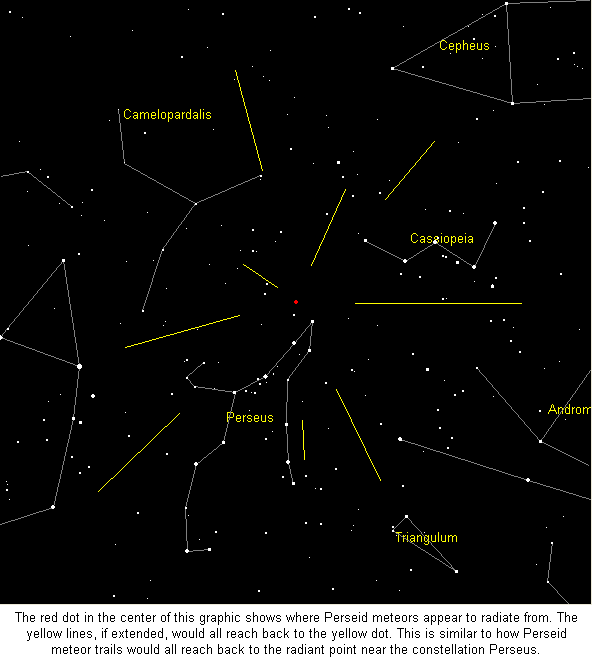 A mathematician named G. V. Schiaparelli made the connection. He calculated the Perseid meteor orbits and saw they resembled the orbit of Comet Swift-Tuttle. Today, we understand that most meteor showers happen when Earth passes through dust trails left behind by comets. The comet itself doesn’t have to pass very close to Earth. It only needs to some somewhere close to the earth’s orbit and leave tiny pieces behind for the earth to strike.

When those tiny pieces hit the upper atmosphere, they light up. There’s a lot of friction between them and the air. So they heat up. Then they may turn white hot. Many meteors are yellow. Some are red. A few are green or blue. The different colors may have something to do with what the meteors are made of as well as just how hot they get when traveling through the upper atmosphere.

You can look up on any starry night and see a meteor if you wait long enough. Our planet is always passing through some sort of cosmic debris. But when Earth passes through an old comet trail, you can expect to see lots of meteors. Astronomers have come to call those meteor showers. Every August, Earth passes through an area where Comet Swift-Tuttle has been. And since the meteors in this shower seem to be coming from the constellation Perseus, they are called Perseids.

This is primarily a northern hemisphere shower. But even those in the southern hemisphere can see a few meteors that travel a long way from their apparent point of origin. And maybe you’ll see some other meteors too.

The best time to see the Perseids will be on the early mornings of the 11th, 12th, and 13th of August. Don’t worry if you can’t be up on those mornings or if the sky’s cloudy for you then. Try again sometime this week between midnight and sunrise and you’ll have more chances to see the Perseids. You may not see as many after the peak, but you can enjoy the view of many other wonders in the sky while you’re looking.