On October 29, Jupiter will be as close as it will be to Earth for 11 years. On March 18, the big planet was at perihelion. That’s when it’s as close as it gets to the sun. During the nearly 12 years Jupiter needs for one revolution, it makes a slightly non-circular path around the sun. At perihelion, Jupiter is 740 million kilometers or 460 million miles from the sun. At aphelion, when the two are farthest apart, their distance is 817 million kilometers or 507 million miles.

Our planet goes around the sun almost 12 times as often as Jupiter. Every 13 months or so, Earth is between the sun and Jupiter. At that time, Jupiter is up all 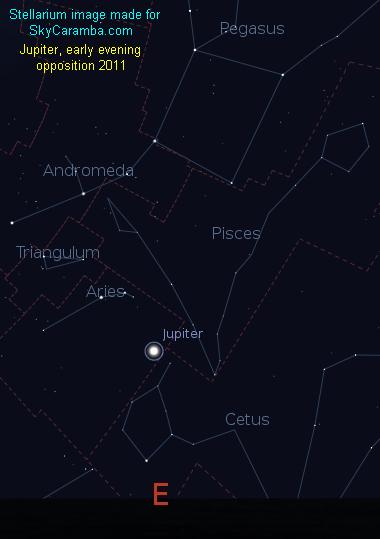 night. It’s said to be at opposition because it’s in the part of the sky opposite the sun. Because Jupiter is moving during the time between oppositions, the distance between Earth and Jupiter is different each time. Earth is closest to Jupiter when Jupiter is closest to the sun. Jupiter’s perihelion and opposition don’t often happen on the same date, but the planet takes so long for one orbit, you can count on being almost as close to Jupiter as you can get at the opposition closest to perihelion. This opposition, Jupiter will be 593.9 million km or 369 million miles from us.

Right now, Jupiter is the brightest thing in its part of the sky. You’ll see it in the east after sunset. If you wait a few hours, closer to midnight, you’ll see Jupiter high above the V of the Hyades and the easily recognized Orion. If you look in the morning, you’ll find Jupiter in the west below the Hyades and Orion.

Jupiter is the solar system’s biggest planet, just over 11 times as wide as Earth. By volume, it would take more than 1,300 Earths to fill the same space as Jupiter. But Jupiter is nothing like Earth. Jupiter is a big ball of gas, about 75% hydrogen and 25% helium with small amounts of other gases. Most scientists don’t think Jupiter has a solid core, although some think there’s a little rocky material inside. 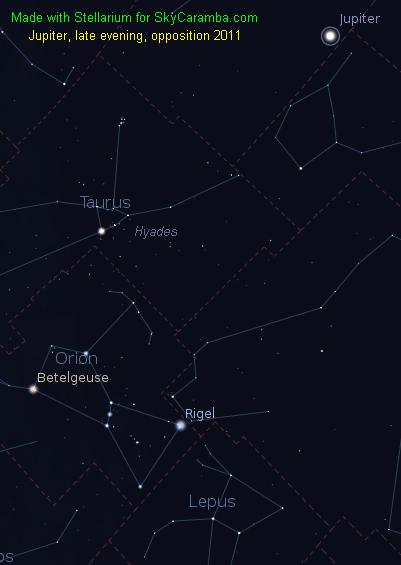 Small black spots made by the broken up comet Shoemaker-Levy 9 in 2004 lasted a few months. But there’s a giant whorl that’s been around since at least as far back as 1664! When you see it, you’ll wonder why it’s called the Great Red Spot. It was red for a while in the 1800s but is tan now. The spot is shrinking, perhaps dissipating.

Here are links to other articles about Jupiter: