As November begins, Mercury and Venus are paired in the western sky at sunset. Northern hemisphere viewers will have a hard time finding them because of the angle with the sun and the horizon. The two planets are barely above the horizon when the sun goes below it. If you’re in the southern hemisphere, the view is much better. In just a few days, the two separate. Mercury will go below and Venus above. Venus at least will be easier for northerners to see.

Jupiter, coming out of its closest opposition in 11 years, is rising at sunset. An almost full moon will pass by it on the 6th. If you were looking at the star Mira a little below the big planet last month, by now you should see it is noticeably dimmer. By January or February, you should expect to need a telescope to see this famous variable. Then by late summer of next year, it will be visible with the naked eye again.

A bright orange star is rising below Jupiter. You’ll find Aldebaran in a V-shape

asterism called the Hyades. These are the horns of Taurus the bull. Between the Hyades and Jupiter are the Pleiades. They are called the Seven Sisters, although most people only see six. Various legends name the sisters and tell of one that is hiding. This asterism is shaped like a child’s kite or the letter Y.

A little later in the evening, the well recognized herald of winter, Orion, is rising. And below him is Sirius the dog star.

Mars rises around midnight. The red planet is scooting eastward along the bottom of Leo, passing bright Regulus on the 11th. The moon passes south of them both on the 18th and 19th. Mars will be in the middle of the constellation at the end of the month. If you happen to see a meteor coming from the direction of Leo, it’s probably a Leonid. That shower peaks around the 17th.

Watch for the ringed planet emerging from the sun’s glare during November. 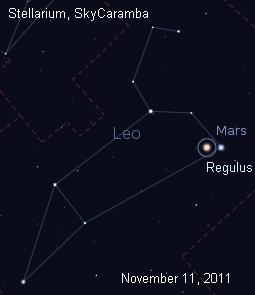 Saturn is low in the sky and still fairly close to Virgo’s bright star Spica. (Remember the “double star” they formed in the spring?) A thin crescent moon greets them on the 22nd.

Around the 8th, astronomers around the world will point their telescopes, radars, and other devices toward an asteroid passing by Earth closer than the moon. The asteroid is named 2005 YU55. It’s expected to be a fast moving object visible in large telescopes after it’s out from in front of the sun on the 8th. Regrettably, this won’t be a naked eye event. 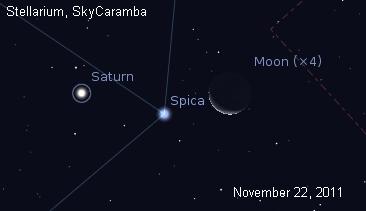 Those are some of the most notable astronomy events for November 2011. Hoping you have good skies.

Here are some links to more information about the above: