The name Mira comes from a Latin word for wonderful. That’s the name given to a star in the constellation Cetus, the whale. Mira is wonderful because it disappears from naked eye view for part of the year and comes back. It’s really wonderful now because it’s about as bright as it gets and it’s up almost all night. Over the next few months you can watch it fade to the point you need a telescope or binoculars to see it.

At its brightest, Mira is a 2nd magnitude star. Those are easy to see even with some city lights around. At its dimmest, Mira is 10th magnitude. Some binoculars can’t draw in enough light to reveal stars that dim and you’ll need dark skies to see objects that dim. Mira goes through a complete cycle every 332 days or a little under 11 months. Sky & Telescope magazine reports it should have reached its latest peak brightness around October 1.

Finding Mira is easy now because it’s somewhat close to another easy to find object. Jupiter will be at opposition later this month and it’s 15 degrees 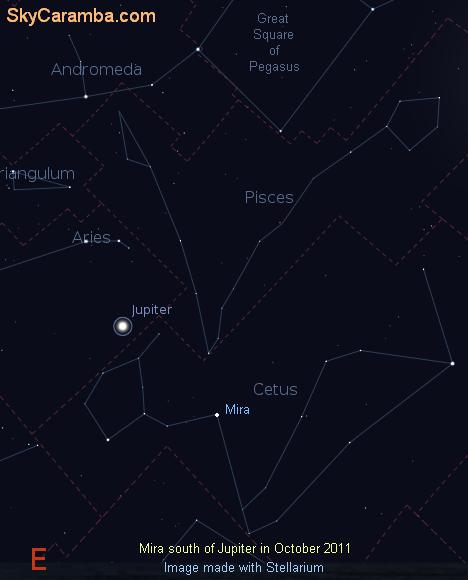 due north of Mira. Find Jupiter and look to the south of it. If you can hold your hand out as far as you can to make a Y with the index and little fingers, they will be about 15 degrees apart. Use that as a guide for finding Mira after you find Jupiter.

Before telescopes, Mira just disappeared from view. When astronomers turned scopes to the fading star, they were able to watch it throughout its entire cycle. German astronomer David Fabricius observed in 1596 that the star didn’t completely vanish. An old notion held that the heavens were perfect and unchanging. The discovery of a variable star said otherwise. In 1662, another German astronomer, Johannes Hevelius, published a work giving Mira its name.

One would think the ancient observers would have told stories about a star that did a regular vanishing act. However, the fact that the star didn’t have a name until 1662 and the lack of a clear mention of a disappearing star in that part of the sky in ancient accounts indicate otherwise.

Mira is a large red giant star, giving up its gases in a long slow stellar death. The discarded gases glow in ultraviolet wavelengths showing up like a comet’s tail. Scientists are interested in knowing more about that so they can understand what happens when stars die.

Different methods produce different results when trying to determine how far away Mira is. It’s somewhere between 100 and 400 light years distant.

Like most stars, Mira has a companion. The Hubble Space Telescope found a white dwarf orbiting from 65 earth-sun distances away.

Links to more sites about Mira: