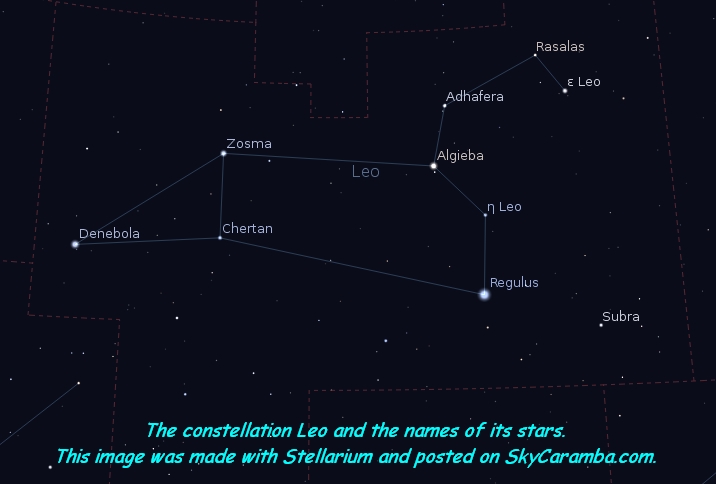 Leo the Lion is up all night at this time of year. It’s often remarked to be one of the few constellations that easily look somewhat like its namesake. The head of the lion is formed by a group of stars that make the shape of a sickle or backward question mark. The tail is a small triangle. This group of stars has been recognized as a lion in many cultures for thousands of years.

The brightest star in Leo is blue Regulus. It’s at the bottom of the sickle. Regulus is Latin for Little King. Many ancient cultures considered Regulus to be a king’s star. It’s also known by another Latin name, Cor Leonis, which means heart of the lion. In Arabic, it becomes Kalb al Asad.

It’s a good thing Regulus is 77 light years away. If we could see Regulus at the same distance from which we see the sun, it would be almost 150 times as bright. Regulus is far different from the sun in another way. The sun rotates once in 25 days. Regulus takes just 16 hours!

Regulus is rotating so fast, it has a tremendous bulge at its equator. The star’s actually shaped like an egg. The difference in density makes Regulus brighter at the poles than at its equator. Some astronomers believe that if Regulus rotated much faster, it wouldn’t have enough gravity to hold itself together.

In 2008, a research team with much skill and sophisticated equipment announced an idea for why Regulus spins so fast. The researchers believe there’s a faint, small companion star that gave up some of its mass and energy to the bigger, brighter one. That other star has not been seen directly, but careful measurements of Regulus’s changing light intensity at various wavelengths suggest it’s there.

Regulus’s place in the sky is in the swath the moon travels. Sometimes, the moon occults (covers up) Regulus. That doesn’t happen every month because the moon doesn’t make the exact same track each time around. But it happened 20 times in a row from January 2007 to June 2008. It’ll happen 20 more times from November 2016 to April 2018. Monthly conjunctions of the two will have to satisfy us until then.

For those of us who will be alive in 2044, Leo’s heart will take on an especially brilliant appearance as Venus occults Regulus. The last time that happened was in 1959. Venus will tease us by coming very close to Regulus in October 2012.

There are two other stars in the Regulus system. They have been seen, and with a small telescope you can see at least one of them. Regulus B is orange and is of magnitude 8. That’s not far beyond naked eye visibility. Regulus C is much fainter at magnitude 13. You’ll need a wider telescope, very cooperative seeing conditions, and perhaps a lot of patience for that one. If you have the equipment for it, photographing Regulus C might be a better bet.